Why Back To The Future Made Me Want More Kids


Who remembers the scene in Back to the Future when Marty McFly's siblings started disappearing out of a photo? (I couldn't find the actual scene but I did find someone showing the photo) I didn't realize when I first watched it as a kid what impact that scene would have on me as a grown adult/mommy.

After three very difficult, sick pregnancies Scott and I decided (mostly after me nagging him to death) that it would be best for us to stop having children and look into adoption instead. So a few short months after our third baby was born Scott had a vasectomy.

A few months after the surgery this scene from Back to the Future popped into my mind... oh how I tried to forget it... but I couldn't... I just kept thinking of the children that were being erased out of our family photo because of our decision.

Here's the good news: By God’s grace this decision was ‘reversible’ for us. Sadly for others, that hasn’t been the case. So after much prayer and support from our wonderful church, Scott went ahead and had a reversal!

About 5 months later I found out we were pregnant again!!! We were both so joy-filled and yet I was also so scared. My pregnancies were terrible, even landing me in the hospital because of dehydration from constant puking. I was resolved though to trust God and research more on how to combat hyperemesis.

I have had much success improving my pregnancies!!! We are now in the middle of my third reversal pregnancy. I can't believe we almost missed out on having our sweet Carebear (Charis), Chloebug (Chloe) and now little Noah. We almost missed out on three wonderful gifts and hopefully more to come!

Last night we received some wonderful family photos that we had taken about a week ago and I couldn't help but think back to that scene again in Back to the Future. Praise God Scott and I have our arms full (and my womb full) in this picture. 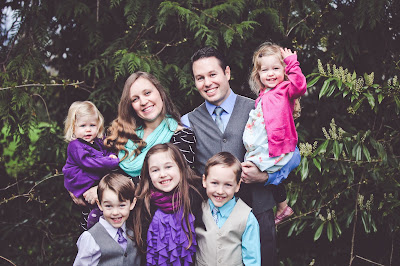 Being Someone You're Not For The Sake of Your Marriage

Do you ever feel like you have to be someone you're not in order to have a good marriage? That's ok! In fact, I would say, that is a good place to be! 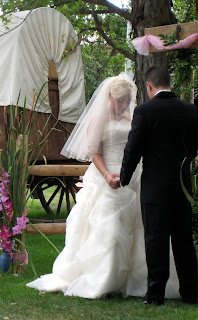 Now, before you start throwing tomatoes at your computer screen let me explain. "You are not your own, for you were bought with a price. So glorify God in your body." 1 Cor. 6:19-20. Did you catch that? You aren't yours. You don't belong to you anymore if you are a follower of Christ. You belong to Him and He calls you to adapt to your husband. He calls you to submit or put yourself under him and that is going to call for a major, difficult changes for most of us... I would dare say, for all of us.

Many of us wives spend so much time worrying about what our husbands aren't or are doing that we lose track of what God has called us to do!

Now maybe you have a super passive man and you don't feel this as much. But in some ways I bet you have to work super hard (not be yourself) and let him lead how he wants (which might look like not leading) and deny your desire to control. Or maybe you are married to a visionary man that has you on a constant roller coaster ride, learn to enjoy the ride. Learn to let go and be someone you're not in order to support your man in a way that seems so foreign and scary to you. Remember, your job is not to make sure your man is doing everything right, your job is to be obedient, respectful and submissive... you better believe that calls us women to be someone we aren't :) Maybe you are married to an organized, leader-type and efficient man like me and you are anything but organized and efficient. Maybe you feel like me and that you have had to be someone you aren't in order to bring the most peace and joy into your home... and that's ok! God calls us to a life of self-denial. Every Christian has to be someone they aren't in different ways in order to bring the most glory to God.


Now hopefully you picked a godly man to share life with that will also experience this push to be someone he isn't in order to love you as Christ loves the church. But if you didn't, that doesn't get you off the hook for doing your part when it comes to obeying God and His calling on your life as a wife.

Proverbs 12:16 says: "A fool’s wrath is known at once, But a prudent man covers shame." Some of us wives are acting as fools letting our wrath and whatever else we are feeling be known at once because we believe in fully being ourselves! But the verse goes on to say a prudent man or in our case, a wise wife, covers shame. The word here in greek means to hide or conceal. Sometimes the best thing for us to do, the wisest thing for us to do, is hide or conceal ourselves. Be someone we aren't. The most miserable wives are the ones who refuse to hide or conceal or deny. The most miserable wives are the ones who are so busy fighting for their rights and being themselves that they forget the ultimate goal of marriage is to bring God glory, not themselves.

So stop fighting against that push to be someone you aren't... instead embrace it! Claim it as if it's something you want because you know that in the long run it will make for a more peaceful home and marriage and therefore life!
Posted by Unknown at 10:49 AM 4 comments: